Welcome!
Close
Would you like to make this site your homepage? It's fast and easy...
Yes, Please make this my home page!
No Thanks
Don't show this to me again.
Close

The Diamond Theory of Truth

There is a pleasantly discursive treatment
of Pontius Pilate's unanswered question
"What is truth?"
-- H. S. M. Coxeter, 1987, introduction to
Richard J. Trudeau's remarks on
the "Story Theory" of truth
as opposed to
the "Diamond Theory" of truth
in The Non-Euclidean Revolution

The image at right below shows the cover of a booklet I wrote in 1976. This booklet details the implications of what I call the "diamond theorem," after the diamond figure in Plato's Meno dialogue. For technical details, see The Diamond Theorem.

The site you are now viewing, Math16.com, offers a less formal treatment of philosophical and literary matters related to the diamond theorem. 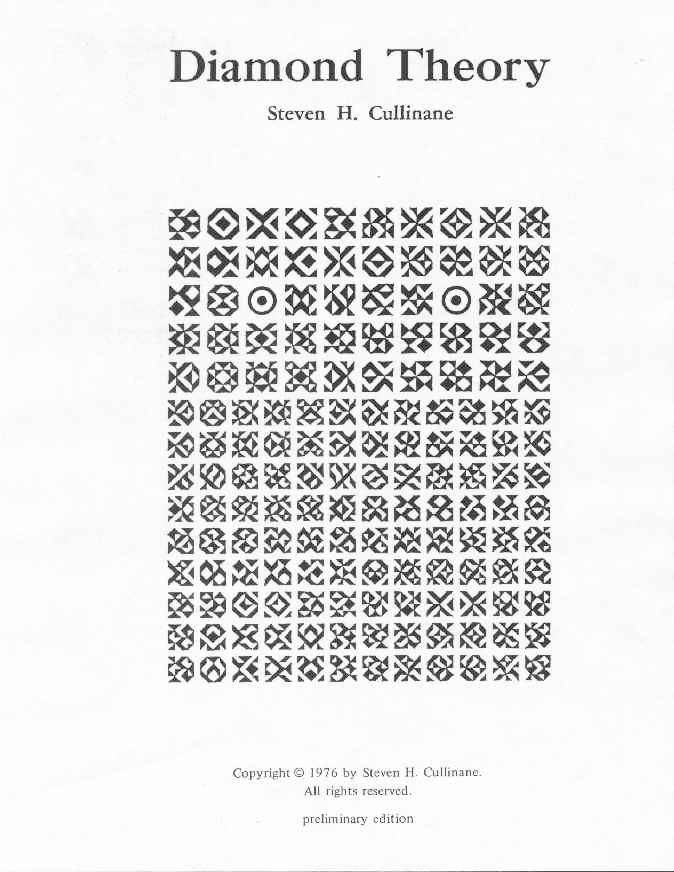 The following quotation describes, and inspired, the picture on the Diamond Theory cover:

"Adorned with cryptic stones and sliding shines,
An immaculate personage in nothingness,
With the whole spirit sparkling in its cloth,

Generations of the imagination piled
In the manner of its stitchings, of its thread,
In the weaving round the wonder of its need,

And the first flowers upon it, an alphabet
By which to spell out holy doom and end,
A bee for the remembering of happiness."

-- Wallace Stevens, "The Owl in the Sarcophagus"

Another description of this picture may be found in the novel A Wind in the Door. A main character in this book is the (singular) cherubim named Proginoskes. A comment from the author:

"Thank you for the diamond theory. It does, indeed, look more like Proginoskes than any of the pictures on the book jackets."

For some philosophical background to the diamond theorem, see

For some background on the philosophy of mathematics in general, see

The Non-Euclidean Revolution.
This book by Richard J. Trudeau, with a brief introduction by H. S. M. Coxeter, traces in the recent history of geometry the conflict between what Trudeau calls the "Diamond Theory of truth" and the "Story Theory of truth" -- known to more traditional philosophers as "realism" and "nominalism."

Plato, Pythagoras, and the diamond figure:

Plato's Diamond in the Meno
Plato as a precursor of Gerard Manley Hopkins's "immortal diamond." An illustration shows the prototype of the figure D discussed at the diamond theory site.

Plato's Diamond Revisited
Ivars Peterson's Nov. 27, 2000 column "Square of the Hypotenuse" which discusses the diamond figure as used by Pythagoras (perhaps) and Plato. Other references to the use of Plato's diamond in the proof of the Pythagorean theorem:

Other sites on the alleged "diamond" proof of Pythagoras --

Illustrated legend of the diamond proof

Babylonian version of the diamond proof

Richard J. Trudeau, in The Non-Euclidean Revolution (see above), opposes what he calls the Story Theory of truth [i.e., Quine, nominalism, postmodernism] to the traditional Diamond Theory of truth [i.e., Plato, realism, the Roman Catholic Church]. This opposition goes back to the medieval "problem of universals" debated by scholastic philosophers. The following are some references on this topic.

Websites on Realism, Nominalism, and the Problem of Universals:

Quine and the Ontological Question
This site offers, to those who click on "problem of non-being," a quotation from W. V. Quine regarding this question: If we say of something that it does not exist, then something exists, otherwise what is the "it" that does not exist? Quine says, "This tangled doctrine might be nicknamed Plato's beard; historically it has proved tough, frequently dulling the edge of Occam's razor." (See Quine's 1948 essay "On What There Is," in From a Logical Point of View, Harvard University Press.)

Meaning and the Problem of Universals
A highly rated site on Logic and Ontology in the Google Web Directory.

Quotations on Realism and the Problem of Universals:

"It is said that the students of medieval Paris came to blows in the streets over the question of universals. The stakes are high, for at issue is our whole conception of our ability to describe the world truly or falsely, and the objectivity of any opinions we frame to ourselves. It is arguable that this is always the deepest, most profound problem of philosophy. It structures Plato's (realist) reaction to the sophists (nominalists). What is often called 'postmodernism' is really just nominalism, colourfully presented as the doctrine that there is nothing except texts. It is the variety of nominalism represented in many modern humanities, paralysing appeals to reason and truth."
-- Simon Blackburn, Think, Oxford University Press, 1999, page 268

"You will all know that in the Middle Ages there were supposed to be various classes of angels.... these hierarchized celsitudes are but the last traces in a less philosophical age of the ideas which Plato taught his disciples existed in the spiritual world."
-- Charles Williams, page 31, Chapter Two, "The Eidola and the Angeli," in The Place of the Lion (1933), reprinted in 1991 by Eerdmans Publishing

For Williams's discussion of Divine Universals (i.e., angels), see Chapter Eight of The Place of the Lion.

"People have always longed for truths about the world -- not logical truths, for all their utility; or even probable truths, without which daily life would be impossible; but informative, certain truths, the only 'truths' strictly worthy of the name. Such truths I will call 'diamonds'; they are highly desirable but hard to find....The happy metaphor is Morris Kline's in Mathematics in Western Culture (Oxford, 1953), p. 430."
-- Richard J. Trudeau, The Non-Euclidean Revolution, Birkhauser Boston, 1987, pages 114 and 117

"A new epistemology is emerging to replace the Diamond Theory of truth. I will call it the 'Story Theory' of truth: There are no diamonds. People make up stories about what they experience. Stories that catch on are called 'true.' The Story Theory of truth is itself a story that is catching on. It is being told and retold, with increasing frequency, by thinkers of many stripes.... My own viewpoint is the Story Theory.... I concluded long ago that each enterprise contains only stories (which the scientists call 'models of reality'). I had started by hunting diamonds; I did find dazzlingly beautiful jewels, but always of human manufacture."
-- Richard J. Trudeau, The Non-Euclidean Revolution, Birkhauser Boston, 1987, pages 256 and 259

Trudeau's confusion seems to stem from the nominalism of W. V. Quine, which in turn stems from Quine's appalling ignorance of the nature of geometry. Quine thinks that the geometry of Euclid dealt with "an emphatically empirical subject matter" -- "surfaces, curves, and points in real space." Quine says that Euclidean geometry lost "its old status of mathematics with a subject matter" when Einstein established that space itself, as defined by the paths of light, is non-Euclidean. Having totally misunderstood the nature of the subject, Quine concludes that after Einstein, geometry has become "uninterpreted mathematics," which is "devoid not only of empirical content but of all question of truth and falsity." (From Stimulus to Science, Harvard University Press, 1995, page 55)
-- S. H. Cullinane, December 12, 2000

The correct statement of the relation between geometry and the physical universe is as follows:

"The contrast between pure and applied mathematics stands out most clearly, perhaps, in geometry. There is the science of pure geometry, in which there are many geometries: projective geometry, Euclidean geometry, non-Euclidean geometry, and so forth. Each of these geometries is a model, a pattern of ideas, and is to be judged by the interest and beauty of its particular pattern. It is a map or picture, the joint product of many hands, a partial and imperfect copy (yet exact so far as it extends) of a section of mathematical reality. But the point which is important to us now is this, that there is one thing at any rate of which pure geometries are not pictures, and that is the spatio-temporal reality of the physical world. It is obvious, surely, that they cannot be, since earthquakes and eclipses are not mathematical concepts."
-- G. H. Hardy, section 23, A Mathematician's Apology, Cambridge University Press, 1940

Quotations added after the death of W. V. Quine on Christmas Day, 2000:

"Contrary to John Keats's First and Second Laws of Aesthetics ('Beauty is truth, truth beauty') truth and beauty are poles apart. Keats's ode itself, while denying this by precept, bears it out by example. Truth occupies the alethic pole of the intellectual sphere and beauty the aesthetic pole. Each is admirable in its way. The alethic pole exerts the main pull on science, in the broad sense: Wissenschaft, comprising mathematics, history, and all the hard and soft sciences in between. The aesthetic pole is the focus of belles lettres, music, art for art's sake."
-- W. V. Quine in Quiddities, Harvard University Press, 1987

"There are almost as many different constructions of M24 as there have been mathematicians interested in that most remarkable of all finite groups."
-- John H. Conway in Sphere Packings, Lattices, and Groups, third edition, Springer-Verlag, 1999

"The miraculous enters.... When we investigate these problems, some fantastic things happen.... At one point while working on this book we even considered adopting a special abbreviation for 'It is a remarkable fact that,' since this phrase seemed to occur so often. But in fact we have tried to avoid such phrases and to maintain a scholarly decorum of language."
-- John H. Conway and N. J. A. Sloane, Sphere Packings..., preface to first edition (1988)

Many actions of the Mathieu group M24 may best be understood by splitting the 24-element set on which it acts into a "trio" of three interchangeable 8-element sets -- "octads," as in the "Miracle Octad Generator" of R. T. Curtis. (See chapters 10 and 11 of the above book by Conway and Sloane.) It is a remarkable fact that the characteristics of such a trio are not wholly unlike those of the more famous structure described below by Saint Bonaventure.
-- S. H. Cullinane, March 1, 2001

"Beware lest you believe that you can comprehend the Incomprehensible, for there are six characteristics (of the Trinity) which will lead the eye of the mind to dumbstruck admiration. Thus, there is

Who would not be rapt by the thought of such marvels?....
All of this is prefigured by the Cherubim...."
-- Saint Bonaventure, The Mind's Journey to God (1259)
(translated by Lawrence S. Cunningham, Franciscan Herald Press, Chicago, 1979),
Chapter Six, "On the Contemplation of the Most Blessed Trinity under its Name: Goodness"

"Was there really a cherubim waiting at the star-watching rock...?
Was he real?
What is real?"
-- Madeleine L'Engle, A Wind in the Door, Farrar, Straus and Giroux, 1973, conclusion of Chapter Three, "The Man in the Night"

"Oh, Euclid, I suppose."
-- Madeleine L'Engle, A Wrinkle in Time, Farrar, Straus and Giroux, 1962, conclusion of Chapter Five, "The Tesseract"

For more on philosophy and Quine,
and also theology and angels, see
Is Nothing Sacred? and Midsummer Eve's Dream.
For a small memorial to Quine, see
On Linguistic Creation.

"It is a good light, then, for those
That know the ultimate Plato,
Tranquillizing with this jewel
The torments of confusion."
- Wallace Stevens,
Collected Poetry and Prose, page 21,
The Library of America, 1997

URL address of this page is http://math16.com.